The Ulster Covenant of 1912 The Ulster Covenant was part of a response by Ulster Unionists to the efforts of successive Westminster governments to settle the running sore of the ‘Irish Question’ by giving Ireland a limited measure of local autonomy known as ‘Home Rule’. The first two Home Rule Bills, in 1886 and 1893, had been rejected by Parliament, following concerted pressure from Unionists in Great Britain and Ireland.

After the introduction in April 1912 to the House of Commons of the Third Home Rule Bill, Unionists, mainly in Ulster, feared that Ireland would no longer be directly ruled from Westminster. The leader of this opposition to Home Rule was Sir Edward Carson who in September 1912 penned the first signature in the ‘Solemn League and Covenant’ with a silver pen at Belfast City Hall. He was followed by Lord Londonderry, Protestant Clergymen and Lord Craigavon.

The Covenant was a pledge by the Unionist people of Ulster, that they would do all in their power to maintain their equal status within the United Kingdom and oppose Home Rule for Ireland – many viewed Home Rule as ‘Rome Rule’ due to the grip the Roman Catholic church had on much of Ireland at the time. People were very afraid Home Rule would mean the removal of their ‘civil and religious liberties’ and the dilution of powerful economic and industrial bases in the Province of Ulster. Sir Edward Carson signing the Covenant in the Ulster Hall 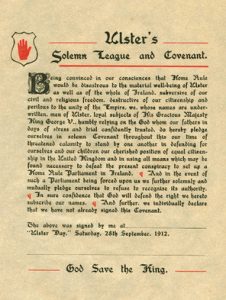 By September 28th 1912, the Covenant was signed by 471,414 people (237,368 men and 234,046 women). It could only be signed by people born in Ulster, but it was signed as far afield as Canada and Australia, as well as in many leading cities throughout the United Kingdom, such as London, Liverpool, Glasgow, Manchester, Bristol and Cardiff.

The Covenant organisers had demonstrated their ability to mobilise huge numbers of people who agreed to resist any attempt, by the British Government from implementing Home Rule, on the people of Ulster without their consent. On September 29th 2012, on the weekend of the Centenary celebrations, a huge parade will be held in Belfast. It will feature the Loyal Orange Institutions, the Royal Black Institution, Apprentice Boys of Derry and bands from across the world. The parade will pass Belfast City Hall before making it’s way to Stormont, where it will pass the Sir Edward Carson statue. It will be the largest parade of its kind in recent memory and will be a fitting tribute to those who rallied to the call one hundred years ago, when Ulster needed them most.

Church services, concerts and re-enactments are also planned in many parts of Ulster to commemorate the centenary.

The Covenant in Wales

The Ulster Covenant was signed by eighteen people from Cardiff and the surrounding areas, some of whom were possibly members of the original Cardiff City Loyal Orange Lodge 803. We are unsure if it was actually signed in Cardiff, or whether these people travelled, perhaps to Bristol to sign the document. The Signing Agent was a Captain C.A. Russellslone of Cardiff.

The SS Gransha, a vessel of the Shamrock Shipping Company, was in port at Swansea on September 28 1912. Five of the crew added their names to the list of Covenant signatories, headed by James McKinty of Barry Island in Wales, who wrote that he was born at Magheramorne, County Antrim. He was followed by Robert McBroom from Glynn, William Magill of Islandmagee, Andrew McKillop of Larne and Robert Craig, also from the County Antrim port. The fact that all these seamen were from the Larne area was no accident, as the Shamrock Shipping Company was based in Larne.

How Was The Covenant Viewed in Wales?

Historically, the Principality of Wales has had strong ties with Ireland and the rebellious independent spirit found in Ireland, is also evident in some parts of Wales. This was reflected in the newspapers of the day, with some mocking the Covenant and the Loyalty of the Unionists. Other papers (particularly the larger titles) were mostly supportive and gave much column space to the ongoing developments in Ulster over the Covenant period.
How the Western Mail and South Wales Echo reported the Covenant and ‘Ulster Day’

The South Wales Echo ran daily articles during the week running up to ‘Ulster Day’ and for several days afterwards. Their correspondent ‘at the scene’ reported the ongoing situation under headlines such as ‘The Fight by Ulster’, ‘Victory is Certain’, ‘Dare They Make Loyalty a Crime’  and ‘An Historic Flag’.The Historic Flag piece read;

‘A surprise was sprung by two presentations to Sir Edward Carson. The first was made by Colonel Wallace, Grand Master of the Belfast Orangemen, who handed him a tattered Orange banner with a black star in the centre and a St. George cross in the top inner corner. It was the actual flag carried by Lieutenant Watson, in front of King William at the Battle of the Boyne. The Lieutenant’s descendants kept the possession to themselves and its production roused the crowd to wild enthusiasm.

Sir Edward Carson said he accepted it as a token of victory for civil and religious liberty.

He was also presented by Captain Craig with a silver casket containing the covenant and a silver pen to sign it and a key, symbolic of Ulster being the key to the situation.

Sir Edward Carson who spoke with evident emotion, said Ulster Day would be a solemn landmark in the history of the United Kingdom.

There is also a section of the newspaper, where Canadian Orangemen from Winnipeg,  pledge their support for Ulster and the British Empire.